Editorial > Block by Block - What the heck is Blockchain? Why do I need to care about it at all?

Block by Block - What the heck is Blockchain? Why do I need to care about it at all? 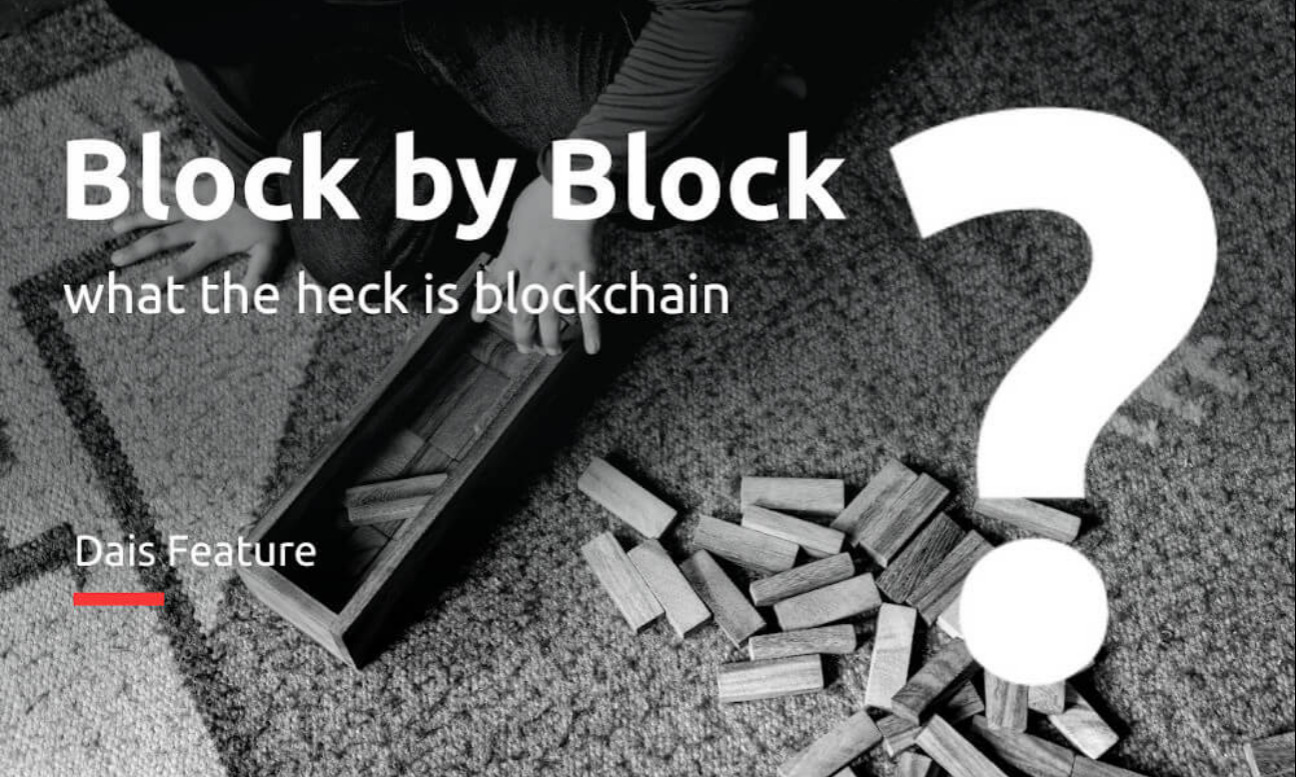 Ever since the word Bitcoin came into popularity, it brought with itself a sense of intrigue and glamour. It became famous as an investment that could double your money overnight and made several people around the globe millionaires, in a matter of weeks. Hence grew the curiosity around the word Bitcoin and thus, Cryptocurrency.

In a bid to explain the background of where these terms originate, several Tech pundits started mentioning the parent concept of “Blockchain” – most of it laced with heavy jargonry. The buzz grew, but only a few of us actually decided to sift through the technical terms and understand what Blockchain actually means and what it could do for generations now and ahead.

We at Dais World decided to explore the world of Blockchain in a simple, easy-to-understand language. The end-purpose was clear - to cut the jargon and break this difficult sounding term down to simple no-nonsense English.

Let’s say a big Hi to Blockchain in our Three-part series ‘Block by Block’ where renowned Blockchain expert Raj A. Kapoor helps us navigate through one of the most in-demand technologies of the current era and the base for all things huge coming up in the Future.

To put it simply, Blockchain is a digital ledger or say a digital register, somewhat like your digital diary. The most popular blockchains allow individuals to make real time transactions on a decentralized network. Decentralized?? Yes, decentralized means not in one place.

We all have heard about the saying “Do not put all your eggs in one basket”. Yes, that’s right! A ledger is like your basket. And the eggs are the data or blocks, or information that is stored in it. Now imagine, you keep all the eggs (information) in your basket.

#1 – someone could take the whole basket away

#2 - someone else could drop the basket altogether .. or

#3 - there could be someone who picks up a few eggs while you’re not looking and makes a meal of it!!

That basket of eggs was centralized.

On the flip side, come blockchain and your data now gets distributed and stored in several “blocks” instead of a single ledger (basket). It’s like having say 12 eggs in 12 different baskets. This spreads the risk factor and data is less likely to be all stolen at a single go.

Now the real kicker. By design, all records are kept on all blockchain transaction and strong encryption algorithms ensure that no transaction can ever be altered once complete. Each block in the chain contains information on a transaction. The chain linking the blocks together is like a ledger, listing the order in which the transactions occurred.

The reason you hear so much about blockchain is because of the exponential growth in its revenues in recent years, that has brought this technology in the limelight. It is estimated that by 2023, the blockchain technology market will be worth more than $23.3 billion, and a majority of that spurt in growth will come from the financial sector. Other sectors are not far behind.  Other sectors are not far behind. In fact, blockchain is being extensively implemented in agriculture, supply chain, logistics, retail, manufacturing, crowdfunding, real estate, land registry, and even voting!

This simply means Blockchain is a technology that will have a major impact on you, me and all things business. It will touch our lives from the time we wake up in the morning till the time we sleep! So, it is important for us to learn as much as we can on this important technology of the future. One block at a time!

Delving deeper – the Definition and Basics of Blockchain

Blockchain is defined as a technology that allows individuals and companies to make instantaneous transactions on a network without any middlemen or intermediary. Every transaction made on blockchain is completely secure, and, as an inherent function of the blockchain technology, is kept as a record of what happened.

It’s important to note that blockchain is still evolving and emerging, which means many of its use cases are still being tested. The financial services industry, in particular, has embraced blockchain, while many other enterprises and industries stand to benefit from blockchain as it works well for the financial sector and the same fundamentals work for most business processes as well.

While most sectors have figured out how blockchain can really add some real value impact, the point is that for now, people are still figuring out how exactly can they use blockchain to cut costs and keep quality products and services functioning seamlessly. This too makes blockchain really exciting because now we can experiment, tweak, and play around with the technology to create new products, solutions and platforms. Major blockchain projects have been released in several other industries especially cybersecurity, supply chain, healthcare and agriculture.

A Forbes survey shows that in 2019, 95% of companies across different industries were investing in blockchain tech projects. In fact, Goldman Sachs, a former vocal skeptic of the blockchain, has launched a crypto-investing product for their clients as well!

According to a Deloitte survey, 74% of companies, globally state that they already have a “compelling business case” for blockchain technology; 34% already initiated a blockchain deployment.

Blockchain is to Bitcoin, what the internet is to email.

Blockchain is the big basic electronic system, on top of which one builds applications. Currencies like Bitcoin, being just one of them.

But we can’t discuss the history of blockchain technology without first knowing some more about the Cryptocurrency that brought maximum attention to it - Bitcoin. The blockchain was invented by a person (or perhaps a group of people) using the name Satoshi Nakamoto in 2008  - with the idea to have this technology serve as the public transaction ledger of the Crypto-currency Bitcoin.

One theory is that Satoshi Nakamoto is a pseudonym. The name “Satoshi Nakamoto” has been associated with Bitcoin since it was listed as the author of a white paper that was distributed amongst the cryptography mailing list.

But, a more popular theory as put forward by the Bitcoin community is that Satoshi Nakamoto could actually be a group of four Asian technology companies: Samsung, Toshiba, Nakamichi, and Motorola. The first part of their names can be drawn to form the words Satoshi Nakamoto – just take the “sa” from Samsung, “toshi” from Toshiba, “naka” from Nakamichi, and “moto” from Motorola!

Anyways, theories apart, Nakamoto’s white paper was released in 2008, and shortly thereafter, Bitcoin was offered up to the open-source community in 2009. Blockchain became the answer to the question of digital trust - it recorded important information in a public space and wouldn’t allow anyone to remove it. It’s transparent, time-stamped and decentralized. (It’s no wonder that today the value of a single Bitcoin is almost USD 19,000!)

Errr.. so Bitcoin is Blockchain?

Hmm... It’s not! And if you have been using the terms Bitcoin and Blockchain interchangeably, don’t worry – you are not the only one; plenty of people make this mistake, probably because Blockchain and Bitcoin are so closely related. If you’ve ever scratched your head wondering what on earth is the difference between the two, then read on.

As I mentioned, Bitcoin is a type of unregulated digital currency that was first created by Satoshi Nakamoto in 2008. It is also known as a “Crypto-currency,” - it was launched with the primary intention of bypassing government currency controls and simplifying online transactions without the involvement of third-party payment processing intermediaries.

Of course, accomplishing this was not so simple and required more than just money. There had to be a secure way to transact with the cryptocurrency. Bitcoin transactions are stored and transferred using a distributed ledger on a peer-to-peer network  - this network is open, public and anonymous. Blockchain is the basic underpinning technology that maintains and records the Bitcoin transaction ledger.

The underpinning technology used by Bitcoin (or by any other Cryptocurrency for that matter) became popular over time and by 2014 the world realized that blockchain could be used for more than what cryptocurrency started to invest in and explore how blockchain could alter many different kinds of operations.

So, how does it work?

The simplest way to explain a blockchain is to define it as literally, a chain of blocks. Those blocks represent data, held all together in a specific order. The data stored in the blocks includes information about a transaction (date, time, amount), who is participating in the transaction (via a “digital signature “), and information that distinguishes an individual block from other blocks in the chain. This information is expressed as a unique code - called a “hash.”

A blockchain is a record of transactions. Using blockchain, anyone – a company or even an individual - can both make and verify these transactions. That’s actually two very important concepts lumped together, so let’s take a closer look.

So, let’s say that the laptop stores in a town are all using blockchain technology to process transactions.

By the time Ravi has finished booting the laptop, everyone’s blockchain ledger shows that he bought his laptop from ABC Electronics for Rs 50,000.

Why not listen to a real-life use-case?

Let’s go back to the part where Ravi’s blockchain copy was sent around town. In reality, everybody else was not only just adding his own block of data…. They were verifying it. If his transaction had said, “Ravi bought a laptop from 123 Electronics, for Rs 75,000,” then somebody else would have (automatically!) flagged that transaction. Maybe 123 Electronics isn’t an accredited laptop reseller in town, or everybody knows that that price is way too high for a single laptop. Either way, Ravi’s copy of the blockchain ledger isn’t accepted by everyone, because it doesn’t sync up with the rules of their blockchain network.

The above laptop store example is obviously a simplistic way to explain blockchain, but it does help in putting the basic point across: adding a transaction to a blockchain involves getting it verified. Whatever your “network” is— from a chain of laptop stores to a bank—everyone will have agreed to rules that determine which transactions are valid and which are not.

In fact, this “democratic” system of security is one of the biggest reasons why so many people are flocking to blockchain right now. No one can change the records, so blockchain is a trustworthy and fair source of information that anyone can verify.

With the definitions and broad outline of Blockchain being covered in this editorial, it is now imperative that we utilize this knowledge to move forward in our journey of understanding its use cases, the burgeoning market for its application, the plans of global corporate giants to include blockchain and propel their daily processes forward as well as what the Indian Government plans to do in the blockchain space.

We plan to navigate through some more case studies and decipher some blockchain myths as well in our next on this series. The objective hereon is simple - to go deeper into this fascinating phenomenon which is already in the process of disrupting the technology space, just as the internet had done 25 years ago.

His thoughts can further be accessed Here.